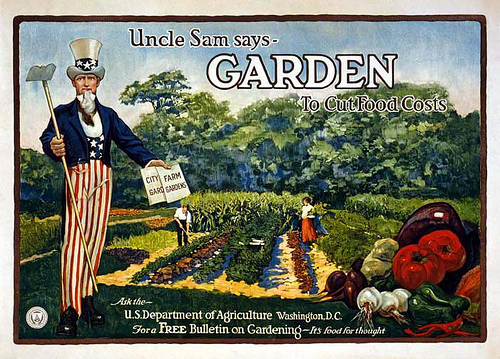 During World War I and World War II industry in America faced a massive void in the manual labor workforce. Following the attack on Pearl Harbor, military recruiting stations began staying open 24 hours a day in order to accommodate the huge influx of patriotic recruits. Rural America was hit particularly hard as farmers traded in their plows and pitchforks for Enfield rifles and Colt 1911’s leaving behind a sizable gap in the proverbial elbow grease that powered the farming industry. In short, American’s needed help with food (among other things), but here is the kicker…

Instead of wildly borrowing, spending, and recklessly racking up insurmountable debt to acquire the needed food, the government went on a campaign to recruit those living in urban areas (who had no farm land to speak of) to begin their own small gardens. The gardens did not have to be elaborate, just something. A flower pot with basil on a window sill of a one bedroom apartment. A 1 foot by 1 foot wooden box with a tomato plant on the roof of a business. It did not matter how large or small the garden was because every little bit helped.

Fast forward 70+ years and here we are in a similar predicament although the reasons have changed. It is now cheaper (before your health fails miserably) for a family to gorge themselves on fast food and TV dinners than it is to buy and consume foods that come from the ground and can actually rot.

If we step back and take a look at our own community, soup kitchens and food pantries can barely keep up with the demand. People gripe about the rising percentage of those on food stamps but choose to do nothing about it. Often times, those who cannot qualify for assistance may still be struggling to make ends meet and their best option is to buy cheap, non-nourishing foods. We all pay for this with rising health costs. In fact, the current healthcare cost is 17.9{b85f92d41f32e11536dd913cce40b22a86049444ce8ae72eb2006c7822b53637} of our gross domestic product. That is to say, almost 18 cents out of every dollar spent goes toward a failing health care system (which also happens to be the #3 leading cause of death in America).

Because of this, all of us at Living Well Spine Center would like to ask for your help. We want you to once again grow a Victory Garden. It can be as simple or as complex as you care to make it. Grandparents, get your grandchildren involved. Teachers, get your homeroom students involved. Businesses, throw out your fake tress that are collecting dust and plant some herbs and veggies. If you have knowledge in gardening, share this with your neighbors. Help us draw a connection to our own food supply once again. By growing our own we can cut down on costs for ourselves and others and reap the benefits of eating the freshest produce available!

One final note I would be remiss if I did not mention. In 1887, President Grover Cleveland did something that is a shame never became a mainstay within the Washington D.C. elites. He vetoed a bill that came to his desk asking for $10,000 to purchase seed for Texas farmers facing a 2 year drought (and by the way, 10k was a drop in the bucket even by 19th century standards). The explanation the president gave was brilliant. “I can find no warrant for such appropriation in the Constitution, and…though the people support the government, the government should not support the people.” He believed that, “the friendliness and charity of our countrymen can always be relied on to relieve their fellow citizen’s misfortune…” Rather than receiving the 10 thousand in government assistance, the Texas farmers were given 20 thousand in charitable donations from neighbors and fellow countrymen. It is time our community began acting like one.