Do-Little, Get a Lot

Have you ever wondered how your pet is really feeling, or why they are the way they are? Especially recently, as buying from a shelter instead of a breeder or pet store is becoming more popular. If there were a way to release emotional baggage from their past, would you want to know? If so, continue reading. If not, perhaps a buzzfeed quiz would be a more entertaining way to pass some time!

No, I'm not talking about voodoo, or animal communication or other special psychic powers. The technique I'm referring to is called The Body Code, which allows us to identify and release imbalances, negative emotions and traumas that get trapped within our bodies or our pet's bodies. These trapped emotions and traumas, both physical and psychic, can manifest themselves as pain, or what we perceive to be misbehavior. The required information is gathered through muscle testing the individual by asking a series of simple questions, and relying on the ever-wondrous subconscious mind. I know, I know. Stay with me here.

I first learned about the Body Code from my mother, who has since become a licensed Body Code practitioner for people. After learning about this work and sharing her successes, she began encouraging me to take this work to the animals. If I'm being perfectly honest, I resisted it for quite some time. It wasn't that I didn't believe that animals feel emotions just as we do. In fact, my perception is that dealing with humans creates more challenges for them. Probably my biggest deterrent was the label that came along with this type of work. People would certainly think I was crazy. How would I explain all of this? What if it doesn't even work? Since I am a fairly straight-forward young woman, I admit to the craziness of it all. I can't really tell you how this works any better than how my wifi signal goes from some tower somewhere, through my home and to my phone. But something clicked for me and I decided to start practicing on my own animals.

As I began to work, I was stunned. Stunned by the accuracy, and the intricacy of the program, it was so bizarre I couldn't make it up. After seeing the positive (and miraculous) changes in my own animals, I decided to share the service with my fellow animal lovers. I've looked back through my notes and decided to select  some stories that I've found most interesting to share with you today! 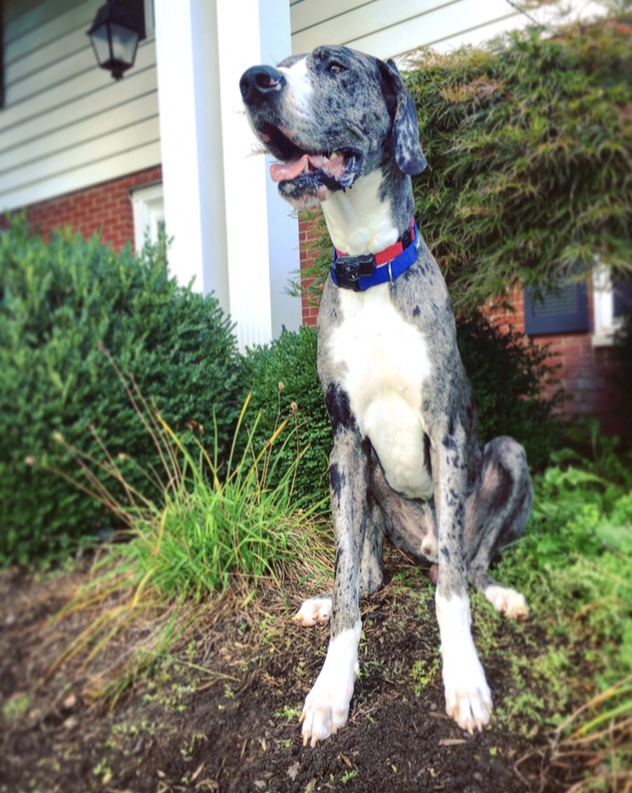 Hiccup, our 1.5 year old Great Dane pup, has always been terrified of men. We've known him since he was 8 weeks old, with no known cause for his fear. He has to warm up to any stranger, but he could barely look at a man, even after he'd met them several times. It was like starting over each time with each encounter. I began to feel bad taking him to town to socialize because it was so stressful for him, never seeming to improve. We didn't understood why, as his breeders were such kind people, and his parents were both sweet dogs, though his mom was a little timid. We wanted to find answers for Hiccup, because we saw the lovable boy he was, and new people and strangers are drawn to him even when he is resistant to their affection. I knew this wouldn't hurt him and that it was worth a try.

A few days after his first session, one of Graham's buddies came over. After about five minutes of hesitation, a switch flipped for Hiccup. He was finally able to be as friendly as he had wanted to be from the start with anyone he met. He was almost obnoxiously excited, but I took it as a positive change. I've worked on him a couple more times since then. Recently we took him for a New Year's Day family hike. He was confident and happy to see my brothers-in-law and my dad. People he would eventually warm up to, but would always greet with a big, alarmed bark, and possibly "hiding" behind me. Once we were on the trail, he was excited to meet men, women, children and other dogs. No barking, no hiding. Needless to say, I'm thrilled to see how peaceful he's becoming! 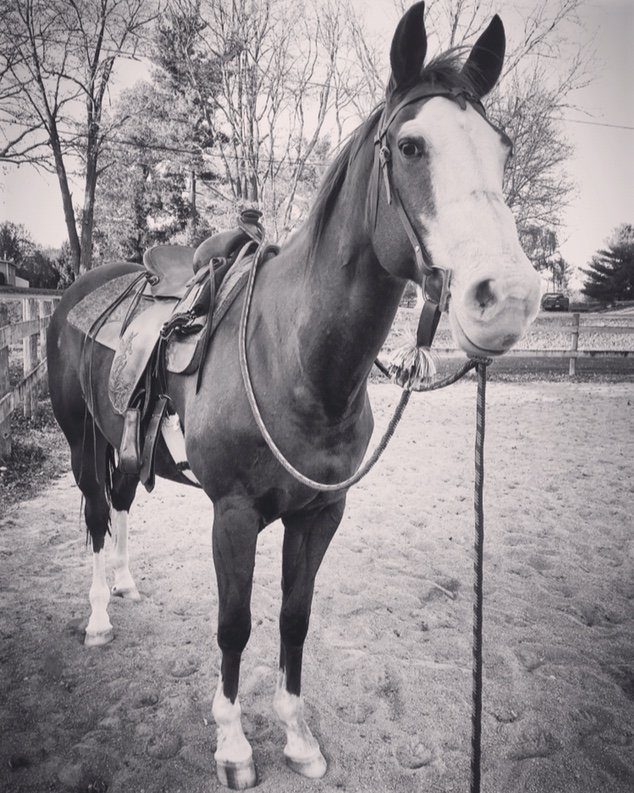 I first met Lucy about five years ago when I was working at a farm in Springfield. My first day on the job "Uncle Dave", who worked on the farm at the time, pointed out this beautiful red mare way out in a field. "See that one way out there," he said, "She's been buckin', kickin', throwing a fit and nobody can figure her out. Why don'tcha throw a saddle on her and see what you can do." So my relationship with her began. Lucy had absolutely no interest in people, running away any time she thought she was being approached. Our friendship began to grow, though, and eventually, I bought her. My original plan was to put a few miles on her and resell her, but I soon realized that we were in this for the long haul. We'd worked so hard to build our relationship, and I couldn't bring myself to risk her feeling abandoned. In the time I've had her she's certainly progressed, but I'd always felt that I was just scratching the surface. She was always fearful and defensive, particularly in the beginning of our time together. Everything was a monster, and she was not easily convinced otherwise. When you spend time around horses and pay close enough attention, you can feel when there's something deep inside them. Something that you hope won't be revealed when you are on their back.

In her first Body Code session, she was literally broken-hearted. Yes, that comes up in the Body Code System. I've found that a lot of animals have broken hearts, which breaks my heart. She also had an imbalance in her somatic nervous system, which controls the "fight or flight" instincts. Things started to make sense to me and I felt tuned in to her in a way that I had been searching for. In her next session, she had a psychic trauma, or a bundle of emotions, that occurred in the same event, trapped in both of her eyes. Emotions like anxiety, horror, and overwhelm, along with several others, and the event that caused this occurred at a young age. All I could imagine was that everything she saw, she saw through this traumatizing filter... this cloud of negative emotions. Like a little kid thinking that the shadow of a tree branch on the wall must be a monster. Three weeks went by since I had ridden her and during that time I was able to have several Body Code sessions with her. Our last ride had been a good one, quite positive. Nevertheless, I had gone longer without riding her than I had since I'd owned her. It was a windy, chilly day. Leaves blowing, trees swaying, horses in an adjacent field running crazy, but she was so quiet. Never a flinch, never so much as a flick of an ear at any of these things. Our next ride was equally as positive, despite a big, scary branch being down next to the arena. She certainly noticed it, but the time it took for her to figure out that it wasn't gonna kill her was minimal. And I started to think there must be something to all of this Body Code stuff. 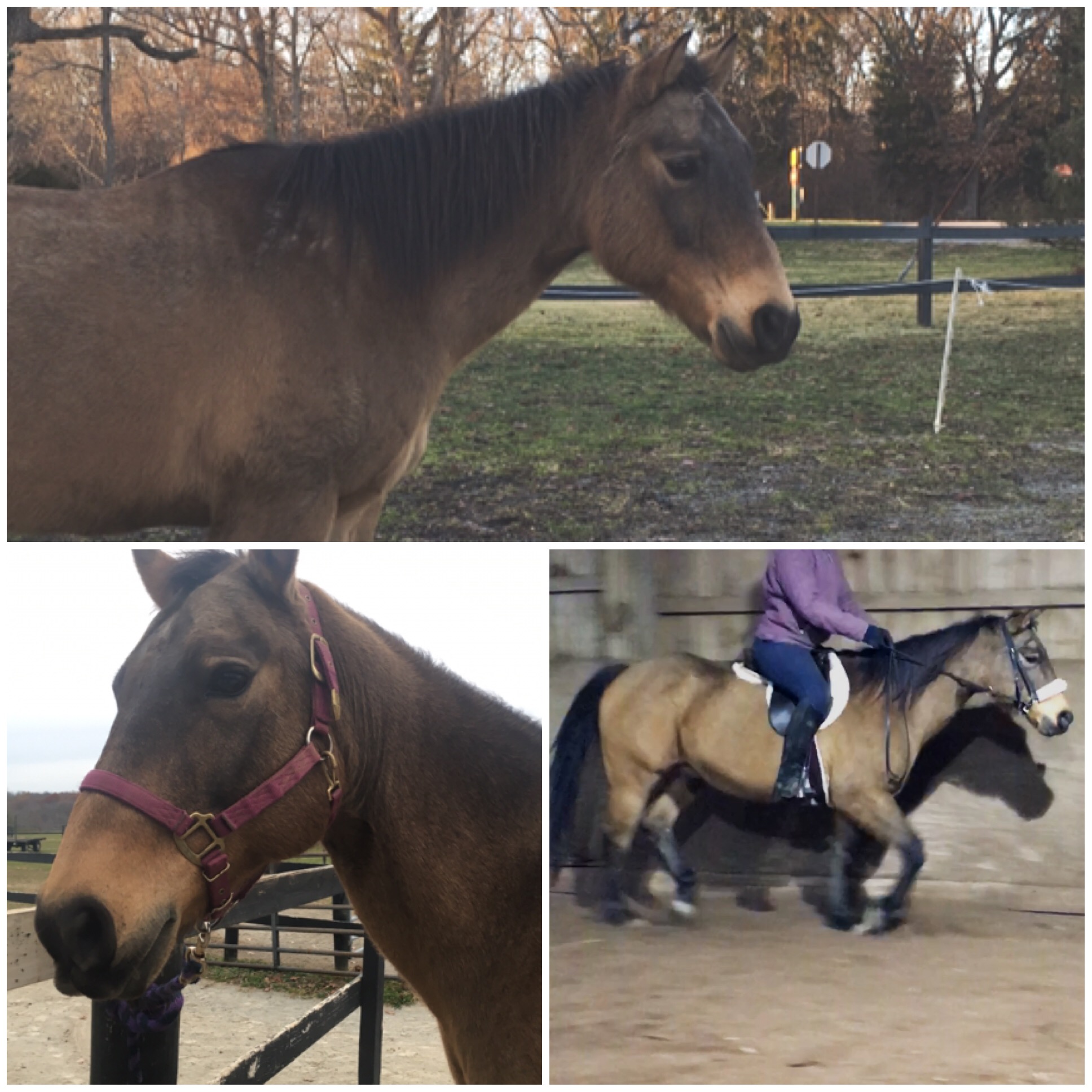 Buddy came to the Riding Centre about a month ago, bought to be a school horse to use in lessons. Very cute, very sweet, but he had some issues. And although I've never ridden a llama, I imagined that it felt just like riding Buddy! His head would be straight up in the air most of the time. And it looked like his neck was on upside down. All the wrong muscles were developed. Nevertheless, he's a kind creature with a good attitude and a will to please, so we set up a riding schedule for him to see what we could do. During these riding sessions with him, I realized he was pretty happy and did pretty well as long as he wasn't getting pulled on, though that is true for most horses. But for Buddy is was extreme, and any pressure at all on the reins would cause him to get quick and hurried and worried and llama-like. Those qualities do not bode well for a horse whose job is to forgive students with unintentionally rough hands.

After talking with  Carolyn, the manager of The Riding Centre, about the experiences I've had with my previous body code sessions, she asked about "working my magic on Buddy", which of course I happily agreed to do. What could it hurt?

He, too, had a broken heart. When this is identified, we begin exploring the underlying causes in order to release them, which allows the heart to mend and become re-connected. For Buddy, the main cause was a misalignment of one of his posterior neck muscles, due to a series of psychic traumas. In the rest of that session, and the two following sessions, all of the imbalances were in his spine... starting in the cervical vertebrae down through his thoracic vertebrae. Some of the culprits were excess adrenalin, psychic traumas and even physical traumas that the emotional damage had caused. No wonder his neck was in the shape that it was! I rode him after his second session and noticed a change. Suddenly I could pick up the reins without him being so bothered. To be sure I wasn't imagining things, I asked one of the girls that had ridden him when he first came to the barn to ride him again. She had a very positive ride with him as well.  After the third session, a long-time student of Carolyn's had come home for the holidays and rode him. Following her first ride on him, she claimed he was "flawless". And finally, after hearing Buddy's stories, the true test came. Carolyn wanted to ride Buddy and feel for herself the changes that others were experiencing. He was calm, steady and quite literally level-headed.

Of course, there can always be other factors. Buddy, and the other animals I've worked with so far, would still progress without the Body Code. I do not claim to be a healer, or share this as a cure-all of anything. It is simply a means to get rid of any emotional baggage that is keeping them from being the best that they can be as quickly as possible. While I can't say it's very scientific, it is very methodical. I'm certainly excited to be sharing this work with the animal kingdom.