Many times, lifestyle convenience comes with a price. Think "fast food" also known as, drive-thru dining, or trans-fats extending shelf life minimizing burdensome trips to the grocery store, or diet soda an illusionary short cut to weight loss. but there is one convenience that most people rarely consider.

The Microwave… and as with the other examples, our health is the price to pay.

Most people have grown up with the microwave, originally known as the radarange, as a standard kitchen appliance in their home. Because of it’s seemingly innocent presence, we have failed to consider the effects it has on the foods that are placed in them, or the bodies that are around them. Radiation accumulates over time and is never eliminated. It is part of the toxic burdens that our bodies bear. In this technological world that we live in - being constantly bombarded by radiation from cell towers, mobile phones, televisions, computers, satellites, and broadcast antennas, eliminating the items that are non-essential are an important step in minimizing your radiation exposure.

Microwave ovens emit electromagnetic frequency. They are classified as non-ionizing radiation. They can not change the structure of atoms but they can cause physical alterations. Damage to your skin and eyes from the sun are examples of non-ionizing radiation. When particular radiation waves resonate with a body part, the biological effects are even greater. Microwave frequencies are very similar to the frequency of our brain, therefore the negative effects are focused on our brain. This is observed in impaired cognition, vision problems, depression and irritability, and hyperactivity in children.

Exposure also creates changes in our blood significant enough to our cells that it triggers cancer growth. And though exposure is an issue in and of itself, it is exacerbated by eating foods that are microwaved. According to a study done in 1992 by Raum&Zelt, it noted that unnatural molecules were observed after consumption of various combinations of microwaved food. Transformation of cells into toxic forms was also noted and blood evaluations indicated hemoglobin and lymphocytes decreases and overall increase in white cell levels and cholesterol. 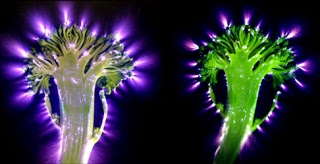 Then also consider the current state of our environment where nutritional value has plummeted due to depleted soil, and chemicals in our foods, every morsel and drop that we consume needs to be as nutritionally potent as possible. On average, microwaved foods lose 60-90of their nutritional value and significant portions of Vitamin B, C, E, and essential minerals. One study done in the Journal of the Science of Food and Agriculture found that when broccoli was microwaved, it lost 97of it’s beneficial antioxidants compared to just 11 when steamed. (The Kirlian photograph above shows the life force of uncooked broccoli on the left, and microwaved on the right.) One writer described it as, “dropping a nuclear bomb on your food, and then eating the fall-out.”  It might help to contemplate that statement next time you are about to “nuke” your food!

It should also be noted that microwaves are most commonly used for “cooking” highly-processed, obesity-promoting foods. Our country is in an ongoing state of malnourished overfeeding. We see it everyday in our office, and this is leading to epidemic rates of diabetes, cancer, heart disease, kidney failure, depression and liver disease.  High calorie +  preservative-laden + minimal nutrients = a life of degenerative disease. We can choose better than that!

Two and half decades ago, I knew that if I was going to take the time, energy and money to cook using organic, high life-energy ingredients in our home that I wanted to be guaranteed that it would be an investment in our health and well-being. Microwaving those nutrient-rich foods would have negated those efforts, so we gave our microwave away. I acquired a tea kettle to boil water, and utilized my oven and stove to cook and reheat foods, and my cooktop and largest stainless steel pot to pop organic corn for movie night! It was simply another course correction as we adapted a healthier lifestyle.

If you still aren’t ready to throw your microwave away, move it to your garage. Improvise with new cooking techniques, and you will quickly realize that the microwave oven has been an over-rated, unnecessary, electricity-guzzling gadget, and can be eliminated from your kitchen counter, which by the way, also eliminates clutter! Don’t try to send it to Russia though, they banned microwave ovens back in 1976! (They reintroduced it in the 1990’s, but you understand what I mean…)